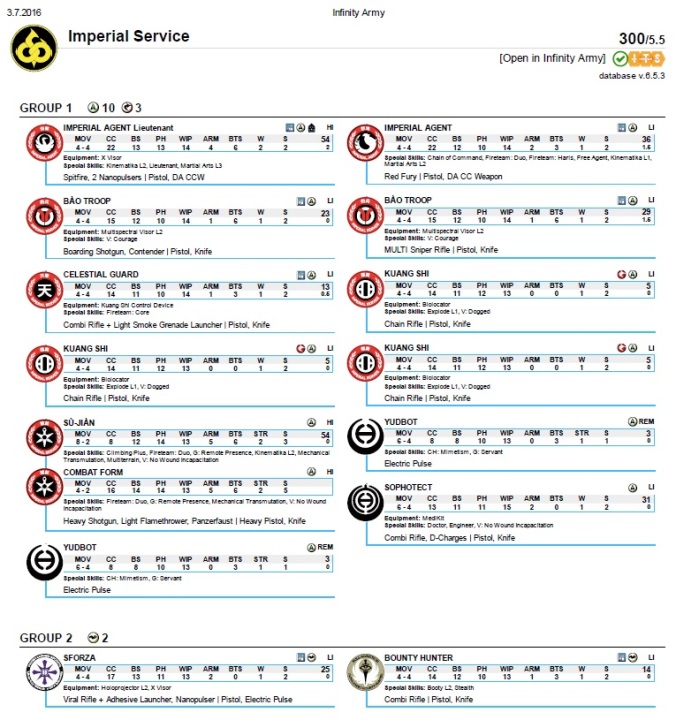 As I had my little talk with our Sophotect Akaseni in the Surveillance Facility one of our security cameras had picked up some shady Caledonian activities in The Neon Dragon Sector B12. Apparently out actions from the night before had driven those lunatics into even more of a frenzy, and now a big group of them was running around in B12 to terrorize and most likely strong-arm some of our local bar and restaurant owners into some sort of illegal contract. 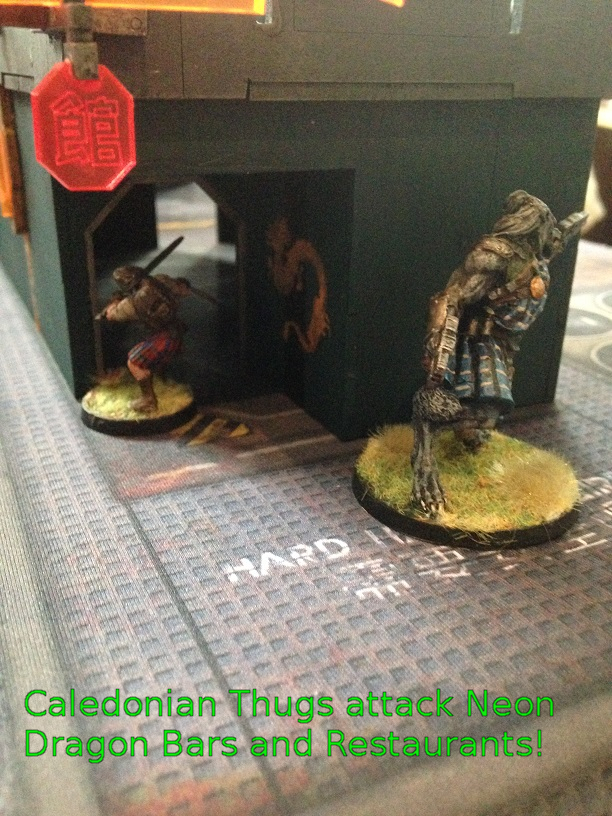 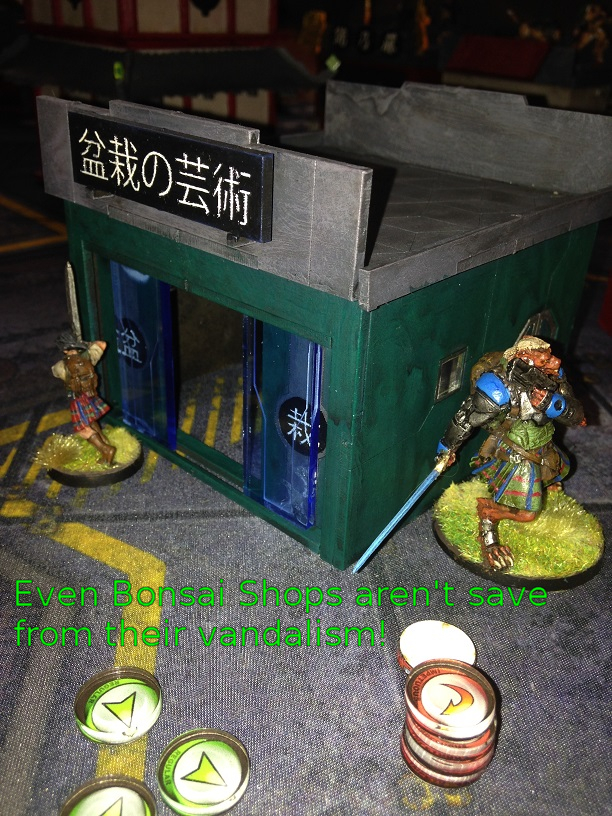 It was clearly time to teach them a lesson and inform them of my new arrival, and it was also a good opportunity to get to know some more of my subordinates, and to ensure that my little box had truly worked.

As I was standing on the elevator platform, one after the other my soldiers arrived as well, although I also saw the priest look alike person I had seen in the above ground part of Neon-jo yesterday, and a woman who wore clothing that clearly didn’t match any uniform regulations of the ISS, although her colour scheme seemed to match ours pretty well.

As Kuang Fu Bao entered the room accompanied by the two Bao Troopers I had previously met in the Armoury, one of which turned out to be the one that I had flattened on the ground the previous day, I gently nodded towards the two oddballs and Fu Bao quickly understood and slightly bent towards my ear while whispering “That’s “Father Anderson” and “Lotus Justice”, two bounty hunters that we regularly employ because of their combat potential and the option to deny our involvement should things go haywire…”

Both Bounty Hunters had apparently heard Fu Bao’s whispers to me as “Father Anderson” nodded slightly towards me as I mustered him, and “Lotus Justice” pulled down her Visor glasses and gave me a cheeky wink before putting her visor back on and checking on her armour, which seemed surprisingly unfitting on her frame, which indicated it to be some sort of loot.

“I’m sorry we couldn’t get more new faces in for you Sir, it’s still quite early in the morning as you know. I think you already know my two Baos here, and over there is Shen Jing again with a new set of Kuang Shi ready for battle. The Sophotect will also join us today, told me you’ve asked for her yourself, so I guess you already knew that, and there is also a Su-Jian, but he’s already in the area of operation scouting ahead.” continued Fu Bao as the platform started to rise.

As we reached the surface I instantly received tactical data from the Su-Jian, Codename “Saberrider”, what a joker. I quickly sent out my troops according to the intel, making sure I myself stayed close to Akaseni to survey her behavior during the battle. 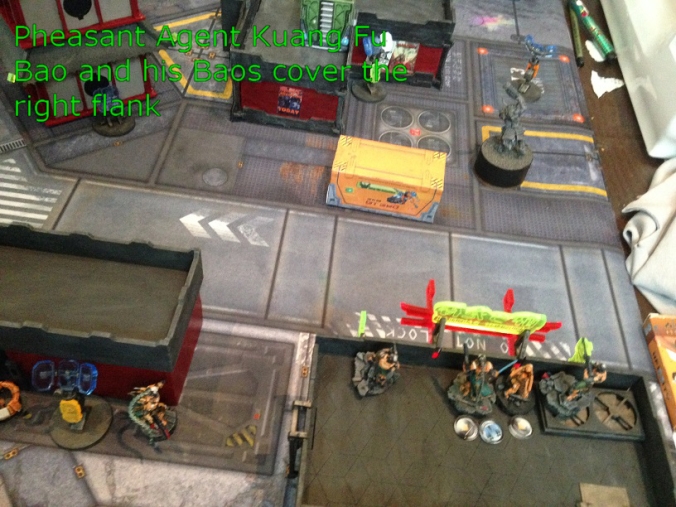 It seemed however that “Saberrider” hadn’t quite managed to stay undetected as the Caledonian Thugs quickly started to attack our positions. The more impetuous of them dashed right out of cover and attempted to cover their advance with smoke grenades, allowing “Father Anderson” and “Lotus Justice” a few good shots which took out one of the Highlanders and wounded one of the Cameronians. 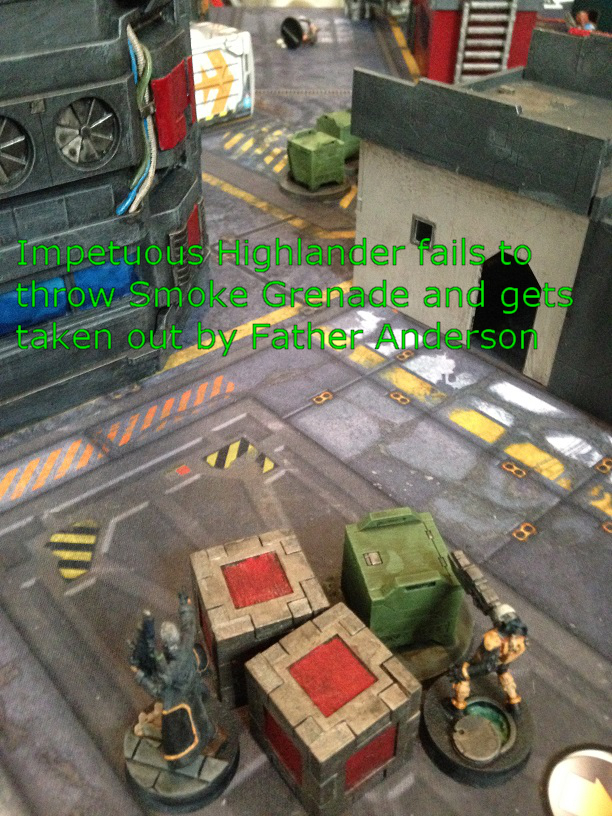 As even more Caledonians used the smoke to advance, “Father Anderson” and “Lotus Justice” had to fend off the Caledonian Commander’s Bodyguard, a pair of Wulvers, but it seemed like “Father Anderson” wasn’t using just regular ammunition as one of the Wulvers suddenly broke down while spitting blood and foam from his mouth while howling in pain, and scared by the, most likely viral, ammunition of the bounty hunter, the enemy commander and his remaining Wulver bodyguard retreated back behind the smoke screen. 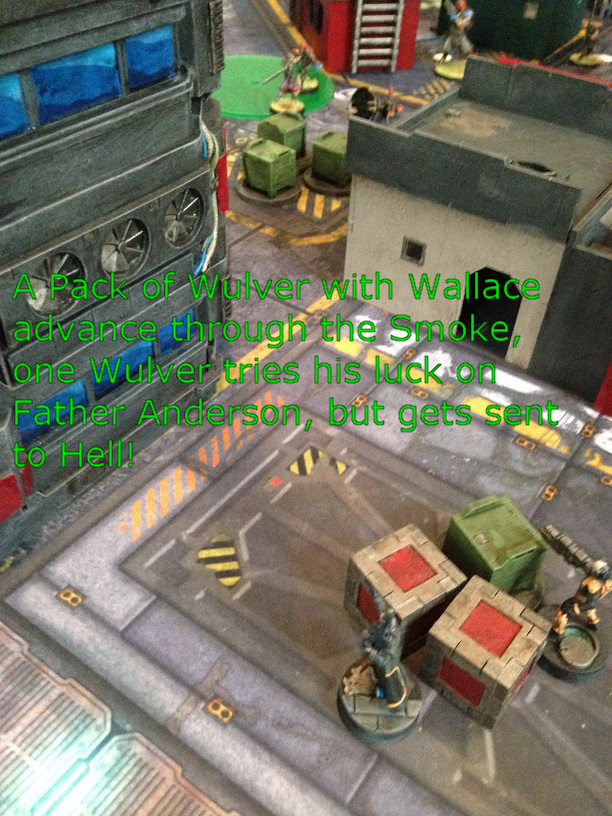 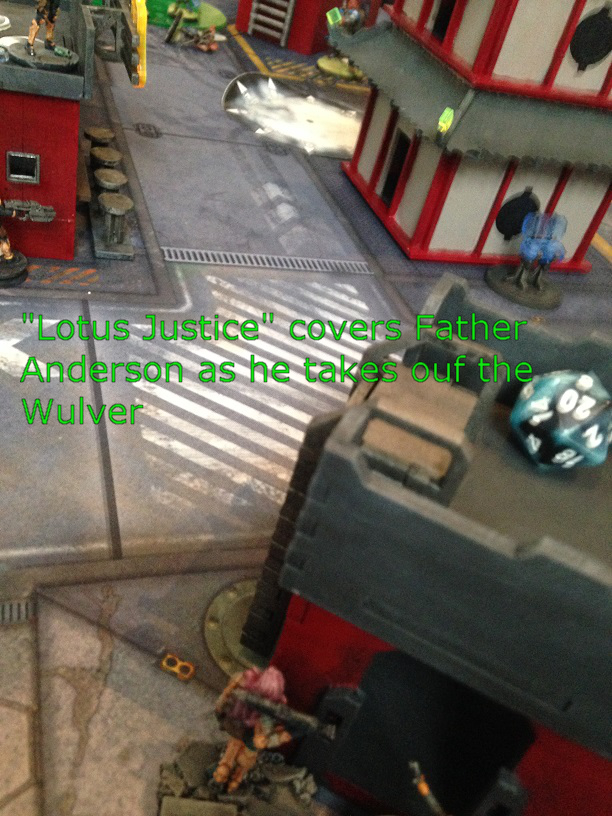 Just as we thought the mad onslaught had come to an end a hidden Cateran revealed himself and took out the Bao Trooper that I had floored the day before. Luckily the Cateran didn’t have any other good targets of opportunity, and even though the Bao most likely wouldn’t be participating in this fight anymore, Akaseni quickly proclaimed that he would live thanks to the Palbot she had standing right next to him which was threating the worst of his wound as we spoke. 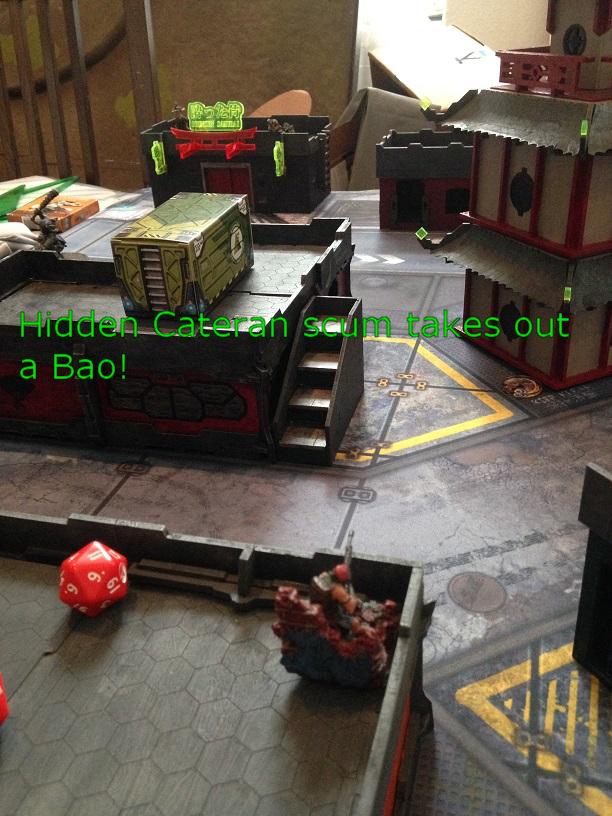 To make things even worse one of the hulking Cameronians used this diversion to jump through the smoke and on top of the building where Celestial Guard Shen Jing and one of her Kuang Shi lay in cover, showering them with his double Chain rifles.

Totally exposed on the roof of the building the Cameronian took countless shots from the Kuang Shi and Father Anderson as he sprayed like a madman, but as he eventually went down I had lost contact to Shen Jing and the Kuang Shi, indicating that his suicide run was a success.

Driven by their comrade’s suicide attack a bunch of Caledonians used the Smoke Cover to advance towards the middle of the table, and one of them, the Hacker presumably, managed to snipe a Kuang Shi through a crack in the Smoke coverage, and even though she was driven back at first, eventually managed to shoot down “Lotus Justice”.

Knowing that control of this battle was slowly gliding out of my hand, I quickly ordered for the Cateran to be taken out, but the Bao Sniper that quickly proceeded to the spot where his colleague had fallen before, failed to hit the Cateran, and was wounded in return.

I was just about to lose my temper and jump on top of the building I had been taken cover behind to finish things myself, as Akaseni held me back by pulling on my shoulder and said “Don’t worry General, I’ll fix this…”.

Releasing some sort of Nano particle Cloud from her Motherforge she then not only continued on to heal “Lotus Justice”, but also used her Palbot to quickly seal the wounds of the Bao Sniper and get him back into action with an adrenalin shot.

The freshly “revived” Bao Sniper quickly proceeded to correct his failure and took out the Cateran with a wild salvo of sniper shots.

With the threat of an enemy sniper gone I proceeded to cover the center of the table from the rooftop of the building I had been standing behind, and both “Lotus Justice” and “Father Anderson” started to pepper the areas in front of them with covering fire to prepare for the incoming Caledonian attack.

In an attempt to ease the incoming blow the Su-Jian Pilot attempted to take out the Caledonian Fireteam that was advancing through the middle, but even though he had a good attack vector, he couldn’t get a proper shot in and was heavily damaged in return, and forced to crawl back to Akaseni’s second Palbot in hope of future repairs. 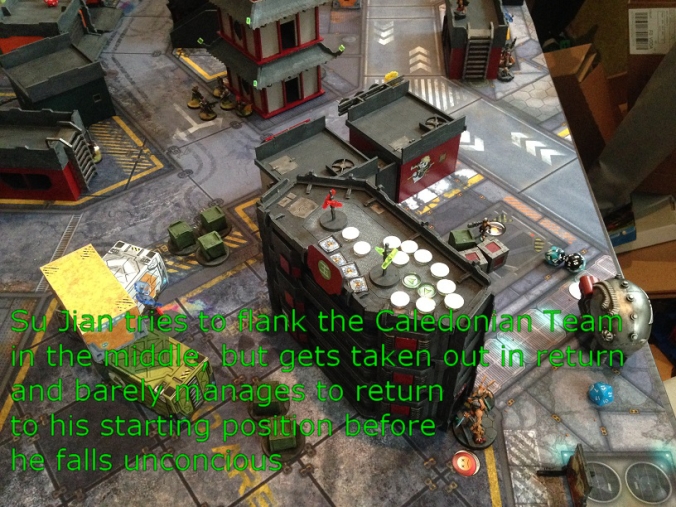 So far so bad I thought as I steeled myself for the inevitable attack that would follow from this failed flanking attempt, and true enough the Caledonian Fireteam rushed on under a new Smoke Screen, and even though the Bao Sniper had a small firing lane at them, he constantly failed to hit them, allowing for them to break through the smoke and attack “Father Anderson” and the last remaining Kuang Shi.

Luckily “Father Anderson” wasn’t ready to kick the bucket just yet, and in combination with the Kuang Shi’s Chain rifle and his own covering fire, he hosed down all but 2 of the Caledonian Thugs with his Viral Rifle. 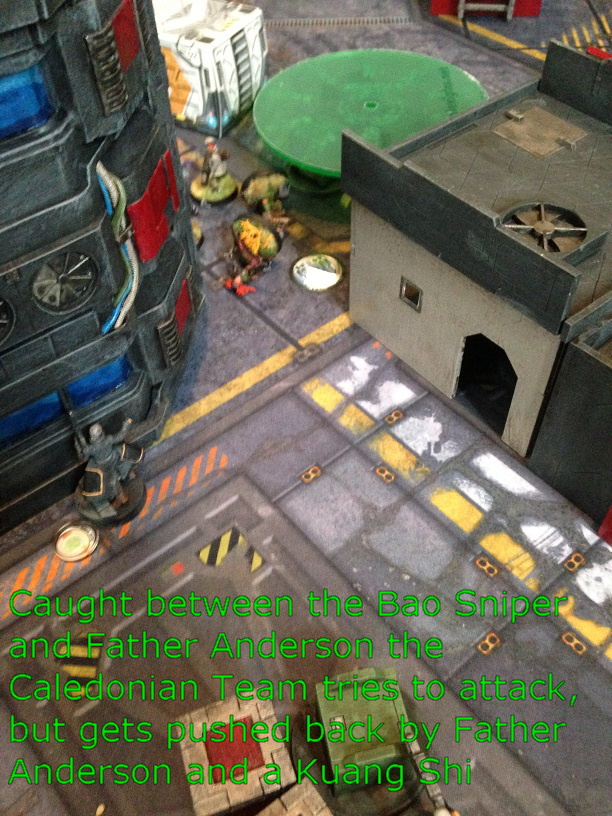 With their flank assault having failed just as badly as my own had failed before, the Caledonian Commander seemed set on at least taking me out, sending his second Bodyguard on a nearby stair to take shots at me with her T2 Rifle. Luckily I spotted her in time, and thanks to the superior X Visor guiding system of my Armour, managed to riddle her with bullets the moment she so much as dared to raise her head above the cover the stairs had provided her with on her way in.

A happy “Yeah finally did it!” to my left indicated that Akaseni had succeeded with repairing the Su-Jian “Saberrider”, and soon enough it made its presence known by bursting around the corner of its original hiding place and burning the 2 last remaining members of the Caledonian Fireteam with its Flamethrower.

Seeing as he had slowly run out of troops to assault with, the enemy commander recognized his defeat, and retreated to fight another day at this point, a surprisingly insightful decision for a Caledonian I must say.

With too many wounded or damaged on my side, I decided to let them run away, preferring my troops to return to the bases medical facility rather than bleeding out while chasing lunatics through the streets for little gain.

With my troops gathering near the elevator shaft that’d bring them back to our base, I took it upon myself to confirm the death of Shen Jing by climbing on top of the blood splattered rooftop where the Cameronian had done his suicide charge, only to find that the female Celestial Guard, covered from head to toe in blood and Chainrifle Ammunition, was somehow still alive, giving a blood splattered grin at me through the cracks In her ruined helmet. “Sorry Sir….I think I’ll require another lift….promise I’ll return the favour in time….”.

As I picked up the Celestial Guard, who had fallen unconscious from the strain of me picking her up in mid-sentence, I suppressed a smirk and wondered about her ability to pick me up in my Heavy Suite of Armour, and hoped the day would never come where she’d have to attempt to keep her promise.

Stepping on the elevator platform and returning to base while Akaseni covered Shen Jing with the Nano Cloud from her Motherforge, I decided it was time for some payback for those Caledonians….

Wow….I don’t know what my wife had for breakfast that day, but she seriously stepped up her game during this fight. Clever use of smoke, link teams and even her Impetuous troops made me almost outright lose this battle in her first turn. If my Sophotect hadn’t managed to heal my troops so effectively, I doubt I could have pulled that one around.

We both really enjoyed playing on the new table, and hopefully it will look even better with the new scatter terrain I am currently painting and the Operation Red Veil Buildings that will hopefully soon arrive ;-P