With the new month around the corner I decided to finally order some things I had wanted to order for quite a while now. Sadly I couldn’t order everything I wanted because they were out of stock at the distributor of my choice, but nevertheless I got the two most important parts.

For this Review I will focus on the first part of my order, which is the Antenocitis Workshop Stand Alone Vendors (as the title already revealed).

I still needed some more fitting scatter terrain for my table, and what is more fitting for an asian city, than a bunch of vending machines? I mean really, have you been to Japan? There are 3 of those on every corner, and sometimes 8+ in a single small street, so how could I go without any for my The Neon Dragon Terrain right?

The set comes in a little blister and is as simple as it gets really, just 4 pieces of resin and 2 sheets of printed surfaces. 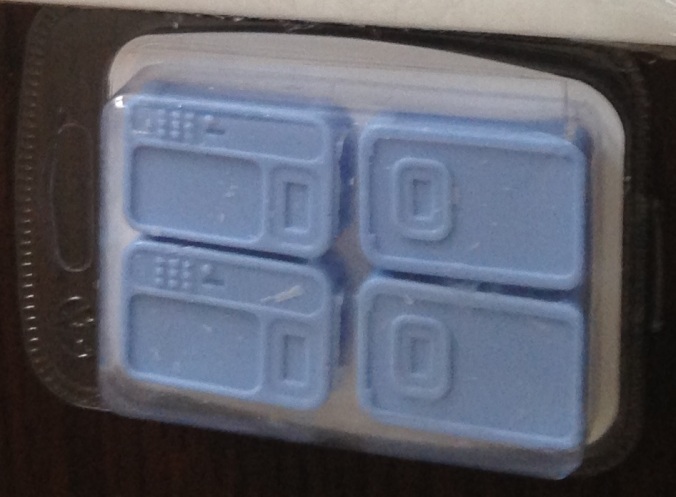 A little bit of trimming is required as some of the Vendors might have excess Resin at the base, while others have small holes instead, most likely depending on how much material made it in the mold. But since this side is the bottom of the machine, once you cut off the excess parts you won’t see anything of it.

The Vendors are tall enough to provide full cover for Silhuette 2 Models if they hide behind the front or back, although the way you’ll usually position them they’ll most likely just give partial cover.

I was a bit surprised to find that the cover prints were actually just printed on sturdy cardboard, but if I had properly read the description I should have expected just that.

I really wonder though why they didn’t go for stickers instead, as it would seem like a really obvious and easy to use option, and I have to say cutting out the middle part on 2 of the front covers was a pain in the neck, and cutting out all the parts properly took almost as long as completely painting all 4 vendors (which only shows how sloppily I paint I guess ;-P)

Once I managed to cut them out and added a little hardcoat to them to make them shine a little bit, I think they do look quite awesome!

(As always, Models not included and only added for scale..) 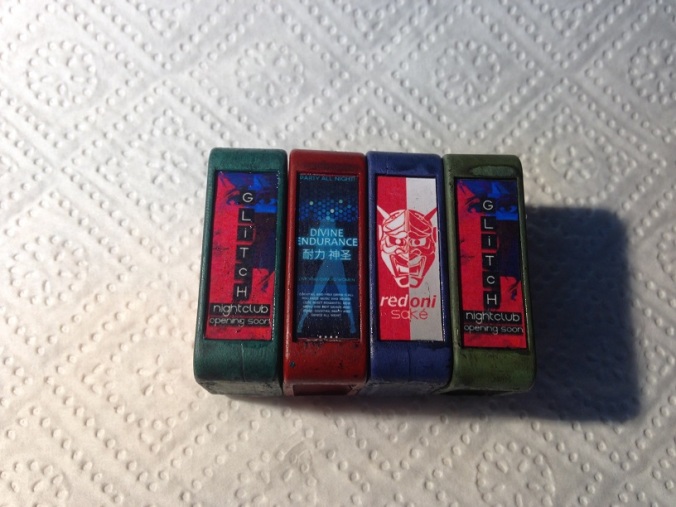 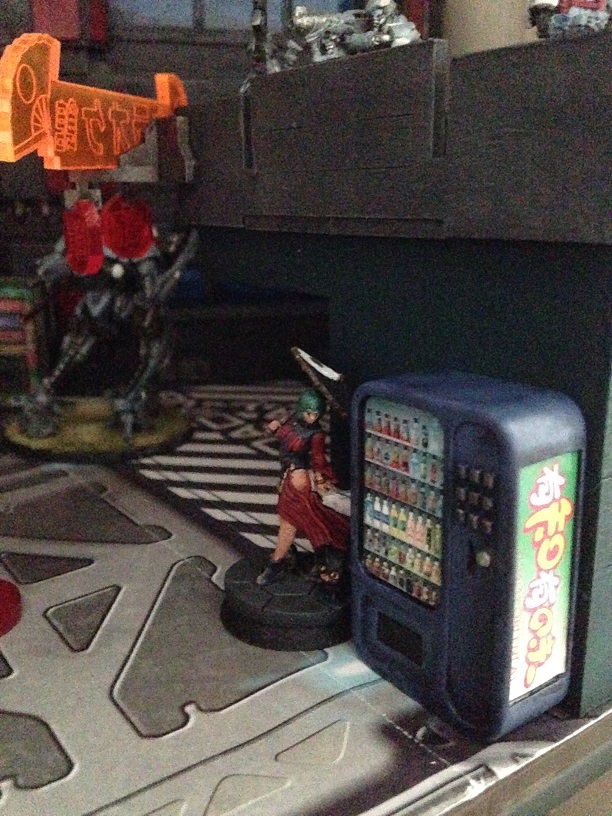 All in all I think this little set is nice for the price, but it is really as simple as it gets, and a little bit too simple maybe. Making each printout unique wouldn’t have killed them and would have added more variety if one would order more than one set, and that the printouts aren’t easy to use stickers is kind of a bummer.

I do however love that the printouts were done in chinese/japanese as it fits perfectly for my Yu Jing themed board, however if you are not a Yu Jing player it makes the set a bit harder to recommend.

I’ll give this set a 6,5, it could be improved by adding different designs, by making the printouts stickers, maybe by adding some neon parts to it, and maybe even adding more different vendor designs  to make using more than one set more compelling (maybe something different than drinks? How about a gun Vendor, or whatnot, there are a lot of crazy vending machines in asia already, and I’m sure in Yu Jing the craziness would just increase!), but I’d still recommend it to anyone who wants some cheap nice looking stylish scatter terrain, even more so if you are building a Yu Jing themed board.